The iconic Automat offered an early example of how automation can improve our everyday lives. It also raised some of the questions that bedevil a more technologized society. Automat aficionado Steve Stollman considers what answers the Automat might have offered as well. 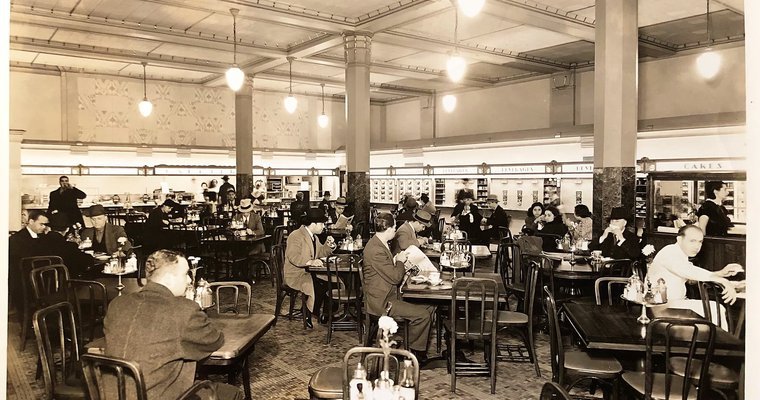 Picture courtesy of the Hardart family.

I was standing on 52nd street, bored to death watching my friend’s car while he delivered some papers to his architect. I left the passenger door open to discourage cops from thinking we were illegally parked. I leaned against the rear fender and when I looked up there was a familiar fellow about to walk past me on the sidewalk, surrounded by a small number of guys in neat suits. I immediately recognized him: Bill Gates and his coterie. I couldn’t just leave the car there to be ticketed but I caught up with them as they passed and threw a question at him.

“Do you know what the Automat is”? Sure, he said, he knew. “Could I write an email to you about it?” Same answer, “Sure.” I was getting too far from the car and I had to leave him alone to continue his journey.

I wrote him eventually and joined the probably thousands of others who got up the nerve to write a very busy Mr. Gates and were not even sent a standard, “Thanks for inquiring” reply. That was the beginning and the end of my personal relationship with one of the richest and most powerful humans on the planet.

As I thought about it afterwards I began to muse on the connection between the man who taught us all to communicate in bits and the ubiquitous food delivering institutions that gave us some of our first looks at what came to be called “technology” — and a view through a little window into the future that was looming before us, without us even knowing what it was or meant.

As you gaze at what is now one of the most familiar logos of all time, what you see, along with the boldface “Microsoft” are four brightly colored little rectangles, inviting you into a new, better world of myriad, still unknown delights.

The design of those little rectangles is familiar to everyone, and they bear a strong similarity to the little windows on the original Automat machines.

Windows — the all-too-familiar name of the software that conquered the world. In envisioning this logo, was Bill Gates imagining a future in which everybody would have access to the best of everything? Could he have been inspired by a childhood visit to a food palace with an infinite variety of delicious treats, surrounded by invisible and mysterious processes, hidden behind a wall of………Windows?

What was the Automat?

In 1902, the Automat, a giant vending machine, was born in Philadelphia. The cubicles covered an entire wall and lived on a steady diet of nickels. The coin slots were so small that they would not accept quarters. Everything cost a number of nickels, and for the best cup of coffee that anyone had ever drank, only one of those shiny five-cent pieces was required.

Amazingly, it was not until the 1950s that this delicious cup of java’s price was raised to two nickels. It was a strict rule that every 20 minutes a new tub of freshly made coffee replaced the current one, no matter how much was left in it. The liquid spilled out of the ornate, sculpted mouths of some mythological creature, a design borrowed from an Italian fountain, which is often described as a lion’s head but actually more resembled a duck.

Since all of the food being served was prepared fresh each day, this was some of the best quality eats available to the public, and it bore no similarity to the typical fare available from a machine, or a street vendor, that had previously been the rule.

The convenience of walking up to one of the innumerable cubicles, throwing a few nickels in the slots and sitting down at one of the tables, oftentimes across from a complete stranger, was exhilarating and important to secretaries on their lunch hour and bank executives for whom every minute was worth a fortune. It is unknown how many of these random pairings ended up resulting in a marriage or business partnership, but there were many.

Why they remembered the Automat

I know because heard about some of these stories when I put up a display of some original Automat units which I restored in the window of my shop on Houston Street years before I became the American distributor for Braimex, the European company that has for 50 years made the modern version of Automats used throughout Europe, now in Mexico and soon throughout the U.S.

I had a constant stream of visitors stopping in and telling me their Automat stories. This was not just a fast food joint, although it was the biggest restaurant chain of its time. This was the second home to a whole slice of the population. It was one of their fondest memories, of being taken there by their grandparents.

We associate vending machines with impersonal activity, instant gratification that lasts a moment. This technology is now considered as archaic as possible, a simple mechanical device, but there was a time when it was the leading edge, a look into a world where machines could do the work of a person — some of the first robots.

Today the stakes are higher

Much has changed in our outlook about automation since that time.

Now we are facing a future in which we are terrified that our value, our ability to perform useful functions, is beginning to be in question.

Other interpretations of this direction are less threatening, such as the possibility of turning over unfulfilling tasks to machines so that the more satisfying activities available to us can be more fully enjoyed. The calculator freed us from spending our days adding columns of figures and was more accurate too. And thanks to the Automat, we could eat lunch without waiting for it to cook, and didn’t have to worry about getting sick or dying from fare that might have been kept in improper conditions. This is called progress.

Can automation provide us the convenience we are seeking and also meet our need for companionship to ensure a better quality of life? Are today’s new versions of the Automat helping to point the way by capturing the convenience and food quality of the original Automat?

Part two in this two-part series will further explore these questions.